At ACMI we use a vision statement to paint a word-picture of what we believe God ultimately wants our work to produce on Earth; the end result of His work through us in communities across the world.

Our teams are made of men and women who are passionate about following our King – Jesus – with everything that we are. We are collectively focused on Jesus’ mission of reconciliation in this world – making other disciples! Our calling has expression both personally and collectively as we discover that God is calling us to walk and work alongside other Jesus disciples.

We see vibrant churches, worshipping the triune God, forming everywhere He leads us. These local Kingdom communities, culturally appropriate and God empowered, provide a sustainable foundation for God’s mission of reconciliation. As we journey alongside these churches – God’s chosen vehicle of blessing for the nations – we, they, and the communities of which we are a part, will be transformed.

Jesus taught us to pray, Your Kingdom come, Your will be done on earth as it is in heaven. Jesus’ vision is our vision. Everything we do will build His Kingdom – a Kingdom that has no walls and no boundaries. The disciples that are made, the churches that are formed, and the communities that are transformed, will multiply into the farthest corners of the earth. 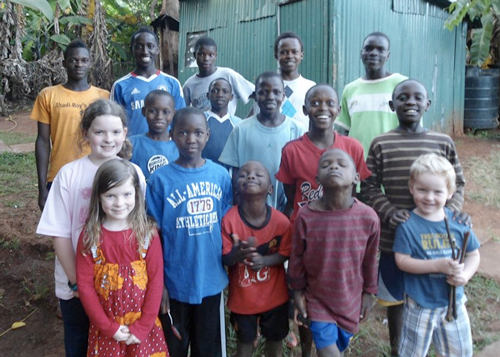 The mission statement gives us our daily marching orders. Faithfulness in this foundational (or essential, or basic) task will transform vision into reality.

Accept Christ’s Call!
We believe God has specifically prepared men and women to join this alliance. Our Lord has called some to go and He has called some to support to those who go! Both are callings. Both are essential to the success of every mission. The call is important as we begin each partnership and it is vital throughout our ministry together. ACM International relies heavily, daily, on the direct intervention of the Spirit of God in each individual life. It is our continuous challenge to “Accept Christ’s Call” day by day… Make that minute by minute!

Cultivate Relationships!
Each mission we accept is ultimately about people! As we enter a foreign culture, our first and constant priority will be to cultivate meaningful relationships with our new neighbors. This high value has far reaching implications on the mindset with which we approach and interact with those whom we pray will become our new friends. It influences our commitment to language/cultural learning, our respect for different values and our firm belief that God will lead us to those in whom the Spirit of God has already been working. Those whose names He wishes to write upon our hearts!

Make Disciples!
We are commanded to make disciples! (Matt 28:19) Planting seeds liberally, sharing the good news about Jesus in the soil of our relationships, is our mission –our common passion. A disciple is one who holds fast to an ongoing commitment to follow our King - Jesus. Churches, full of disciples, serve the sick and the poor - have a passion for social justice; they know how to give; are bold in their stand for truth and they, too, are committed to the task of making new disciples.

Influence the World!
Disciples of Jesus, and the churches they fill, directly challenge evil and the sin that destroys life within their sphere of influence. The power of Christ’s Kingdom, at work through those who lay everything on the altar before Him, is, quite literally, the only hope for the radical transformation desperately needed in this world.

After World War II, several people from the Christian Churches / Churches of Christ in the United States wanted to begin mission work in the Belgian Congo, as it was then known. However, the Belgian government restricted missionary activity only to those connected with a legally recognized mission agency. Therefore, the African Christian Mission was incorporated in the State of Ohio, on October 11, 1947, by leaders within the independent Christian Churches.

The first missionaries were sent to the Congo in 1948 to begin the work. They began in the Ituri Rain Forest of northeastern Congo, opening the first mission station at the village of Bomili just outside of Stanleyville (now Kisangani) in the territory of Bafwasende. The work grew quickly and a strong church was formed. Even in the years after independence (1960) when turbulence and war forced many of the missionaries to evacuate, the church in Congo stood firm.

After working exclusively in Zaire (the name was changed from Congo in 1970) for 45 years, African Christian Mission began to expand its geographic vision. In 1994 ACM formally assumed Bread of Life (Pain de Vie in French), another USA based missionary group, into its organization. Bread of Life is a legally registered Christian Church in the country of Mali, in West Africa. In 1996 ACM began similar discussions with West Africa Christian Mission, based in Nigeria (also in West Africa), and a merger was later completed with them as well.

In 1995 the Lord led ACM to close out our missionary role in Zaire (now known as the Democratic Republic of the Congo) for a time. This process was completed in early 1996. At that time ACM missionaries moved out of Zaire to begin ministries in several different locations within Africa (including Nigeria and Mali) as well as other parts of the world.

Due to the nature of the new ministries God was opening before us and the prospects for reaching out into areas beyond Africa, it became clear that it was time for us to consider changing our name from African Christian Mission to something less limiting geographically. In an attempt to maintain some connection with our past while opening ourselves up to God’s leading for the future, we took on the name ACM International. This name change became official in early 2008. In August 2009 it was decided, by the ACM International Trustees board, that the letters ACM from now on, would stand for the Alliance of Christian Missions. This was not a decision to change our name, but rather to give new definition to the letters ACM. Our official name remains ACM International.

We love what “the Alliance” communicates about our team. This word describes well the way God has brought us together. And even more than an alliance of organizations, we are an alliance of individuals determined to work in unity toward our common purpose - to establish churches who are effectively sharing life with all that surround them! The alliance also captures our prayer for the future. We have a deep commitment to work in harmony with others, individuals and organizations, whom God might choose to place beside us. We also envision men and women, whom we have yet to meet, joining the family. This includes those who may be called to become members of ACM International as well as those who are called to lend support to the work God is doing through our team. So – “What does ACM stand for?” We are the Alliance of Christian Missions!